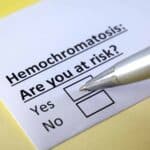 Often referred to as a disorder that leads to, “too much of a good thing,” hemochromatosis is a condition that causes affected individuals to absorb too much iron from their food. This increased absorption and storage can lead to a whole host of problems. Let’s take a moment to highlight what this disorder is all about and how it can affect those who have it.

Hemochromatosis is a genetic disorder that alters the body’s ability to regulate iron absorption. Normally the body only absorbs as much iron as it needs from food, and it has a regulatory system in place that helps to ensure that excess iron is eliminated, rather than stored. However, this disorder is classified as an iron storage disorder which results in excessive total body iron and causes the body to store excessive iron in body tissue.

Geneticists have identified that it is a genetic disorder involving the human hemochromatosis protein which is encoded on chromosome six. This gene is in part responsible for regulating iron in the body, so mutations to this gene can result in an iron storage disorder. Though it is possible to suffer from hemochromatosis for another reason, most cases relate to these gene mutations and these mutations are inherited in an autosomal recessive gene.

To dive a little into the biochemistry behind hemochromatosis, we have to take a quick look at hepcidin, a liver-derived peptide that suppresses the release of iron from various cells. Patients with these various gene mutations have impaired or inappropriately low levels of hepcidin, which affects the regulation of iron absorption, leading to an increase in absorption in the intestines that eventually leads to excessive iron stores throughout various organs in the body. (1)

This genetic disorder is actually more common than you might think, affecting 1 in every 250 people. (2) It is estimated that 1 million people in the U.S. have hereditary hemochromatosis. (3)

The Symptoms of Hemochromatosis

Typically, it takes some time to become symptomatic for hemochromatosis because the build up of iron happens slowly. In males, symptoms usually present after the age of 40, and females present even later, as menstruation plays a role in routinely eliminating some of the excessive iron. This usually means that females who suffer from hemochromatosis take longer to present with symptoms, and often these symptoms appear after menopause.

In many cases, this disorder is quite stealthy, causing fairly vague symptoms which can include:

When disorders present with a broad range of fairly common symptoms, it can be more likely that medical professionals will miss the true underlying cause or an accurate diagnosis may take longer to get to.

The Importance of a Speedy Diagnosis and Treatment

Because this disorder causes the body to store excess iron throughout body tissue, including in a number of major organs, the sooner the correct diagnosis is found and treatment begins, the less likely there is for the chance that irreversible damage occurs.

If it is left unchecked, hemochromatosis can lead to a number of dangerous complications that can include:

To avoid these serious complications, early detection is key.

How Do You Know If You Have Hemochromatosis?

Due to a genetic link, if you know of others in your family who have this disorder, it would be wise to get tested.

Anecdotally, patients talk about a wide range of troubling symptoms that left them asking questions and seeking medical advice. Chronic and persistent fatigue was often noted, as was a difficulty stringing together everyday thoughts or feeling a general mental confusion and tiredness. Joint pains and arthritis are often experienced, while others notice the color of their skin seems darker, or wonder why they are not losing their summertime tan.

It is crucial to remember that patients who seek medical advice and treatment early on and are able to get treatment prior to any organ damage are able to manage and control the disorder and live a normal, full life.

How Is Hemochromatosis Treated?

The key to managing this condition is to get rid of the excessive iron. Often this is done through venesection or phlebotomy therapy, fancy terms for blood removal. When treatment is first started, depending on the iron stores in the blood, patients typically have to give a unit of blood weekly or every other week. As the iron stores in the body fall, the blood removal becomes much less frequent, where patients may need to remove a unit of blood 4 to 6 times each year. This is controlled through careful monitoring of the serum ferritin.

It is also beneficial to change your diet, paying specific attention to the iron content of the food you eat, as well as foods that inhibit or promote the absorption of iron. Diets that are designed for hemochromatosis focus on nutritious whole foods, while removing or limiting foods that are high in heme iron. Understanding hemochromatosis and how diet can play a role in the condition is a great way to reduce negative symptoms, mitigate long-term complications, and feel better overall!