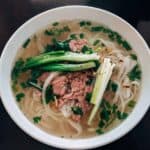 There's nothing quite as satisfying as a really good bowl of pho. That broth! So I decided to make a low-carb version with shirataki noodles. They hold up great and make for an awesome bowl of shirataki noodle pho.

Pho is All About The Broth!

The most important part of this recipe is the broth. Don't skimp on the seasonings and make sure you carefully follow the directions to char the onion and ginger and heat the spices until fragrant. This is super important to make a flavorful broth.

You can also ad or remove whatever spices you like. These are just what I chose based on my pho recipe research. Feel free to customize to your liking.

I love to use my homemade bone broth as the stock for this recipe. I'm always on the lookout for new ways to incorporate bone broth into our diets given all of the amazing health benefits of bone broth. I think this shirataki noodle pho is probably the most delicious way I've found to get it in!

When it comes to toppings, you can literally add whatever you want!

Add whatever tastes good to you. Some folks omit the noodles or replace them with more veggies. Some decide to just go with meat and broth. That's what's so fun about Pho, you can customize it to your mood and your taste.

You can serve this soup as a main dish or as a side. You can even do a soup and salad combo. I think it would pair well with a tomato and avocado salad, green salad, or even a Caesar.

If you do decide to make this shirataki noodle pho, I'd love to know what you think! 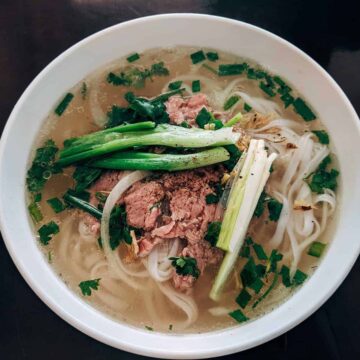 Heather Cooan
There's nothing quite as satisfying as a really good bowl of pho. That broth! So I decided to make a low-carb version with shiitake noodles. They hold up great and make for a great bowl of pho.
5 from 1 vote
Print Recipe Pin Recipe
Prep Time 30 mins
Cook Time 30 mins
Total Time 1 hr
Course Mains
Cuisine Vietnamese
Servings 1 Pot of Soup
Calories 711 kcal

Your Garnish of Choice:

For low-iron choose a non-red meat protein. For vegetarian substitute a vegetarian protein. Nutrition is calculated with chicken.