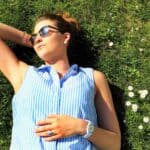 Did you know the role of vitamin D in autoimmune disease is incredibly important?

You are probably used to seeing food packaging that boldly proclaims to be fortified with vitamin D. But you may be less aware that vitamin D is naturally present in very few foods, and without some minimal exposure to the sun and vitamin D fortified foods, most of us would present as having a deficiency of vitamin D. And, according to the most recent data available, nearly 42% of the U.S. population is deficient in vitamin D. (1)

What’s more, foods fortified with vitamin D are often breakfast cereals, dairy or soy milks, all of which are typically avoided when someone is attempting to manage an autoimmune condition as those foods cause inflammation in the body and many people with these conditions are very sensitive to dairy, gluten, and grains, among other things.

Let’s explore a bit more about vitamin D, its role in autoimmunity, and the best way for us to get more vitamin D.

What is Vitamin D?

Vitamin D is a pro-hormone, a derivative of a steroid, that belongs to a category of fat-soluble vitamins and is found in the sebaceous glands of the skin of animals. It is often referred to as the ‘sunshine vitamin’ as it is primarily obtained through bare skin being exposed to the sun. It can be acquired in lesser amounts through foods, such as fatty fish, like tuna and mackerel, cod liver oil, the aforementioned fortified cereals and milk, egg yolks, liver, and cheese.

For quite some time, the role of vitamin D in the maintenance of calcium homeostasis, bone health, and the prevention of rickets has been known. But newer research also links vitamin D to proper sleep regulation, where it appears to be involved in regulating the sleep-wake cycle through vitamin D receptors in various regions of the brain. (2)

In addition to that, research has shown increasing evidence that there is a strong association between vitamin D signaling and different biological processes responsible for regulating our immune systems.

Almost a decade ago now, research came out showing that vitamin D clearly played a larger role within our immune systems, and current research indicates that vitamin D receptors are found in a number of immunological cell lines throughout the body, including monocytes, dendritic cells, and activated T cells, having a role in modulating immune functions, and subsequently, playing a role in either the development or the prevention of autoimmune diseases. (3)

The Role of Vitamin D in Autoimmune Disease

The role of vitamin D in autoimmune disease is complex because the immune system itself is a very complex system with a lot of components interacting in a number of different ways. When you start wading into the scientific literature on vitamin D and autoimmunity, it can really be an upstream swim of immunological terminology, which can start to get really confusing, really fast. So, before we wade in, now might be a good time to provide a brief definition of some of the terminology.

B cells – cells that make up part of the adaptive immune system and are responsible for generating antigen-specific antibodies. They are produced in the bone marrow and migrate to the spleen where they mature and differentiate into immunocompetent B cells

Treg activity – the activity of Regulatory T cells, which provide an important ‘self-check’ within our immune systems that help to prevent excessive immune reactions

Dendritic Cells (DCs) – are antigen-presenting cells that process antigen material and present it to the T-cells of the immune system, acting as a messenger between the innate and adaptive immune systems in mammals

Polymorphisms – in terms of genetics, this describes multiple forms of a single gene

So, it turns out that vitamin D has a number of effects on various cell lines in the immune system, including the following (4):

Therefore, if sufficient levels of vitamin D plays a key role in inhibiting DC differentiation and maturation, a deficiency of vitamin D may lead to more DC maturation, which in turn leads to a greater possibility that mature DCs present self-antigens to T cells and incorrectly elicits an immune response against the self. (4) That is a crucial factor in setting the immune system up for failure, where cells that are meant to communicate tolerance to the self, are now incorrectly identifying the self as non-self antigens.

I hope you were able to wade into that with me and at the very least, start walking upstream to see that vitamin D plays a very important role in autoimmunity. This information and immune functionality are often included in the scientific literature in pretty colored pictures with plenty of arrows showing you how this leads to that, then this leads over here, and then from here, there, and everywhere, you end up at autoimmunity. I can’t say they are anymore easy to digest than just breaking down the facts, but if you feel like taking a swim around in some colorful visuals, have at it! (3, 4, 5)

And, if you’ve found yourself here after both reading my break down and checking out pretty charts, here’s the sweetened condensed version. Scientific studies are yielding evidence that suggests that impaired vitamin D signaling and/or inadequate vitamin D intake caused by either genetic predispositions, from polymorphisms, or environmental factors, like insufficient exposure to sunlight, may contribute to both the onset and progression of a number of autoimmune conditions.

Multiple epidemiological studies have shown that there is a high prevalence of vitamin D deficiency and insufficiency in patients with Multiple Sclerosis, Type 1 Diabetes Mellitus and Systemic Lupus Erythematosus. (3) All of these conditions have been shown to involve a mix of genetic predisposition and environmental factors. And, in terms of vitamin D, it appears that having vitamin D deficiency and having genetic variations in the vitamin D receptors throughout the body, which may make deficiency even more likely, is strongly correlated to the incidence and severity of the disease presentation in a number of autoimmune conditions. (5)

These findings would suggest that understanding how an individual acquires and processes vitamin D may be a contributing factor to the onset and progression of autoimmune disease and that there may be potential treatment protocols using vitamin D that either can help prevent or mitigate the immune function in people with these diseases or autoimmunity as a whole.

The Summer Sun’s Calling Your Name

To wrap up our mini-lesson, the best way to get more vitamin D is to spend more time in the sun. Shoot for between 10 to 30 minutes of midday sunlight, several days per week. Remember, it is important to expose bare skin without sun protection on. Your body needs to absorb the UVB rays that it will then use to produce vitamin D.

So, why not make it fun? Get out into the sun for a walk through the neighborhood, a quick bike ride, or head out into the garden. Stay conscious of the time or set the timer on your phone, and if you plan to be out in the sun for longer, bring along a good quality non-toxic sunscreen, and apply it after you’ve let some of those rays get in and do their job! Your immune system will thank you for the support.

And, if this isn’t a great option for you and your dietary intake of vitamin D containing foods is insufficient, consider talking to a nutrition counselor on ways that you can improve your diet or ways you can supplement with vitamin D.

Disclaimer All information on this website and in HDC Media products, services, meal plans, and content is general information. Nothing on the website or any HDC Media content is intended to be a substitute for professional medical advice, diagnosis, or treatment.

Affiliate Disclosure Many outgoing links on HeatherCooan.com are affiliate links. If you purchase a product after clicking an affiliate link, I receive a small percentage of the sale for referring you, at no extra cost to you. HDC Media is a participant in the Amazon Services LLC Associates Program, an affiliate advertising program designed to provide a means for sites to earn advertising fees by advertising and linking to Amazon.com.