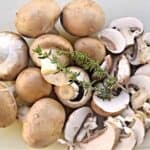 With over 50,000 species of mushrooms out there, including molds and yeasts, scientific evidence is emerging to show just how crucial a role they play in the health and wellbeing of the human body. While some are hallucinogenic or poisonous, making people apprehensive about consuming mushrooms, it’s important to realize that edible mushrooms have co-evolved alongside humans forever. Revered in many cultures for both their delicious savory flavors and their medicinal properties, science seems to support that mushrooms deserve acclaim as an ancient superfood. The health benefits of mushrooms are abundant!

In fact, delving into the scientific and medical literature out there on mushrooms is downright daunting. Long molecular names and difficult to pronounce chemical compounds pack the reports. But if you can sift through the high-falutin lingo and boil it down to the nitty gritty, what emerges is a simple truth - in terms of health, longevity, and nutrition, mushrooms are downright amazing! Included on their list of magical properties, mushrooms have been shown to be antioxidant, anti-cancer, immunomodulating, anti-inflammatory, anti-microbial, prebiotic nutraceuticals.

For some reason while discovering all the benefits of mushroom eating, especially in terms of their cancer fighting properties, I keep imagining an army of bright Super Mario toadstool mushrooms being enlisted to take down this insidious disease. But despite that funny visual, colorful mushrooms are usually a sign to stay away, and are much more helpful to Mario and Luigi than they are to any of us. In fact, mushrooms that are helpful to humans are much more goomba-like in their visual aesthetic. No matter their humble appearance, they pack a powerful punch in the fight against cancer, and here’s why.

Mushrooms are showing a widespread ability to be anti-cancer, halting the disease progression of many types of cancers. Many species of edible mushrooms have been shown to be anti-tumor, anti-metastasis, and anti-angiogenic. (1)

Angiogenesis is the process in the body that generates blood vessels. While an important process for the body where healing is concerned, as with most other bodily functions, when this process is out of whack and dysregulated due to a diseased state of the body, this process becomes corrupted and supports the disease process. Where cancer is concerned, a tumor needs blood vessels to grow, so the anti-angiogenic factors of mushrooms help to limit or reduce the growth of tumors by creating a cellular environment that is prohibitive to the formation of these vessels.

Used in Asia for thousands of years, the turkey tail mushroom (aka. Trametes versicolor) helps boost the immune systems of cancer patients undergoing chemotherapy. Pharmaceutical drugs, when trying to stamp out a disease like cancer, often do damage to body systems that are also helpful in fighting the disease. This mushroom has been found to be a potent immune therapy that’s very useful in supporting the body’s natural immune system when a patient is undergoing powerful drug therapy. (2)

Along with cancer-fighting properties, researchers are also uncovering that one of the key health benefits of mushrooms is longevity and overall well being. A recent study found that seniors who consume more than two portions of mushrooms weekly may reduce their risk of having mild cognitive impairment by up to 50 percent. (4) It seems that mushrooms are packed with powerful antioxidants that seem to slow the aging process, allowing older people to maintain a higher level of cognitive functioning for longer.

Important research into two antioxidant compounds, ergothioneine and glutathione, has shown that these compounds play a vital role in protecting the body against many diseases of aging, including neurodegenerative diseases like Alzheimer’s, cancers and heart disease, and many species of mushrooms are packed with these vital compounds. (5) Of 13 species of mushrooms tested in the study, the porcini species contained the highest amount of both of these compounds.

Paul Stamets, a popular author, mushroom researcher, and speaker of the oldie but goodie TEDTalk entitled “Six Ways Mushrooms Can Save the World,” has gone so far as to say that mushrooms are the “neurological network of nature.” (6) He believes that they are sentient beings and that their level of co-evolution with all of Earth’s species has led mushrooms to be intrinsically aware of the needs of their hosts. While his ideas may seem a little out there, as the study of the benefits of mushrooms deepens, there is evidence emerging that in addition to their cancer-fighting roles and antioxidant properties, mushrooms are also prebiotic and play a role in human gut health, pointing to a long evolutionary link between humans and their fungal friends.

A Problem with Mushrooms?

Despite all the health benefits of mushrooms, there are a few problems with mushrooms that somehow manage to not be a problem with the mushrooms themselves, but rather the lack of understanding humans still have towards them. Compared to synthetic pharmaceutical drugs, mushrooms contain thousands of elements, each having their own potential effect on the body and the immune system. Drugs are often a single compound with a known ‘mechanism of action’, making it more straightforward for the FDA to analyze the specific action of the drug in the body.

Because of the natural composition of mushrooms, it is difficult to understand the intricate mechanisms at play, making it a challenge to establish regulations that say definitively that a particular species of mushroom has a specific benefit in the body. On top of that, natural products are subject to natural variation from harvest to harvest, and precise scientific research requires a level of consistency that’s difficult to obtain. Mushrooms are also subject to the soil in which they are grown, so mushrooms can collect heavy metals and other toxins through contaminated soil, making safe consumption a legitimate concern.

The fact remains that mushrooms are incredibly important for human nutrition and medicine, probably even more important than we imagine. The health benefits of mushrooms are too good to ignore.

Modern focus on single-molecule disease-fighting drugs often makes very potent and even deadly medications that do as much bad as they do good. Humans have evolved to rely on the complex interactions of the body, nutritionally speaking, and it doesn’t seem so far fetched that humans will start trending back towards natural, plant-based, whole food medicine, like the mighty mushrooms that have walked the evolutionary path along with us.

I love mushrooms and put them in all kinds of stuff. Here are some of my mushroom recipes.