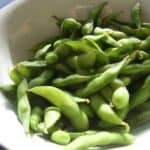 We've heard about soy quite a bit. It's usually touted to be the definition of healthy eating, everyone from Oprah to CNN has been pushing the health benefits of soy. However, the health effects of soy can be quite dangerous.

Soy contains isoflavones, which act similarly to estrogen in the body. I don't know about you, but hormones are bad news in my book. A study published in 1998 in the journal Cancer Research indicates isoflavones promote the growth of human breast cancer cells implanted in rats. Plus, women drinking isoflavone-infused soy drinks have been shown to have an increased proliferation of breast cells. The more breast-cell growth, the greater the risk of tumors.

Research scientists and doctors say that soy and its chemical components may promote cancer, dementia, reproductive abnormalities, and thyroid disorders. ''You don't want to go overboard with soy,'' says Bonnie Liebman, who is director of nutrition at the Center for Science in the Public Interest in Washington, D.C.

The Dark Side of Soy - Bloomberg

If you pay any attention to the food you put in your body you'll know that American's are eating an enormous amount of soy. Always check the ingredients in your food, don't just check out the white box of 'Nutrition Facts'. Really look to see what kind of unpronounceable substances are in the food you eat daily.

Soy derivatives are in most processed foods. You may see them in the form of soybean oil, soy lecithin, MSG, natural flavors, vegetable oil, vegetable proteins, vegetable starch, and many others. It really is alarming, the number of items that contain soy considering soy is one of the most allergenic foods in the world. It's been genetically modified to resist pesticides and never tested or labeled to clue us into what we're eating.

I suffer from hypothyroidism and this diagnosis was my first clue into the dark side of soy. Before soy came back as moderately reactive on my food sensitivity test, my doctor instructed me to abstain from soy as much as possible. I've never really liked the taste of soy, soybeans, or soy products, so I didn't think I had an issue. I never bought any of the items made from soy like soy meat replacements, tofu, soy proteins, soy milk, or soy ice cream.

Along with hypothyroidism and adrenal fatigue, I've also grappled with severe PMS over the years. I mean you name it, I had it in the symptoms department. Bloating, cravings so strong I had to battle not to eat the couch and every other thing I could find, horrible breast tenderness, and mood swings. I would cry at the drop of a dime, and be spitting nails angry the next minute for no apparent reason. As it turns out, these issues are some of the health effects of soy.

It wasn't until I went paleo and started kicking out all the processed crap and really reading ingredient labels and looking up odd substances like xanthan gum, and MSG to see what they really were and how they were derived that I discovered I was actually eating a lot of soy and I had been for years.

I've been cutting out all sources of soy over the last few months and I've noticed a HUGE improvement in PMS. No more breast tenderness, no more mood swings that would rival the most alpha of gorillas in the Congo, no more tears that come so easy it's like I'm leaking, and no more cravings! This month I didn't even think about chocolate or any of the other junk foods I usually dream about during 'that time of the month', not even my coveted French fry or potato chip.

There has been such a change that my period actually surprised me this month, I didn't have the normal warning signs. Hormones are a terrible thing to play with and I will not mess with them again. Soy is now and forever banned from my diet. The health effects of soy are not to be taken lightly.

More Articles You May Enjoy