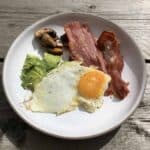 The Ketogenic diet is not a new phenomenon. The diet first appeared in the late 1970s and has grown in popularity in recent years in response to the low-fat diet craze. As dieters had trouble with low-fat plans, they searched for a new solution and low-carbohydrate diets utilizing nutritional ketosis found a new audience.

A lot of people have jumped on the keto bandwagon and there has been a lot of hype as a result. But what are the basic principles of a ketogenic diet?

The diet centers around the hormone-driven cause of why we get fat. The over-consumption of carbohydrates and simple sugars leads to weight gain by way of a metabolic condition called insulin resistance. The way your body processes the carbohydrates you eat has more to do with your waistline than the amount of fat or calories you consume.

However, insulin-resistant individuals have a more difficult time using and storing excess carbohydrates. The more insulin that your body is exposed to, the more resistant it becomes. Over time, the pancreas releases more insulin and cells become insulin resistant. The cells are trying to protect themselves from the toxic effects of high insulin. They create less glycogen and more fat.

As a result, insulin-resistant individuals gain extra weight. The carbohydrates get converted into fat instead of energy. Other side effects include fatigue, brain “fog” (the inability to focus, poor memory, loss of creativity), low blood sugar (which can lead to hypoglycemia), intestinal bloating, sleepiness, depression, and increased blood sugar. There is much more than weight at stake when you are insulin resistant.

The remedy for people who are insulin resistant is a diet restricted in carbohydrates. The crux of the ketogenic diet is the severe limitation of carbohydrates of all forms. The foods restricted include simple sugars (like cookies, sodas, and sweets) and complex carbohydrates (like bread, rice, and grains). Even carbohydrates that are considered healthy, such as fruit, oatmeal, brown rice, and whole wheat bread, are restricted on the program.

The diet restricts carbohydrate intake to less than 20 grams a day. This will put your body in a state of nutritional ketosis. While in ketosis, your body will burn fat as fuel. Ketosis also positively affects insulin production and it will prevent more fat from being formed. Your body will begin using your stored fat as an efficient form of fuel, and you’ll lose weight.

Another benefit of the keto diet is that nutritional ketosis will end your cravings for carbohydrates. If you’ve been living on a carb-heavy diet, you may have found that you simply cannot get enough carbohydrates. With carbohydrate restriction comes a reduction in carbohydrate cravings. People who have been on the diet for some time report that they do not crave carbohydrates as they once did.

Although the initial phases of the diet are rather strict, the program teaches you to restore balance to your diet in the long run. People who reach their ideal body weight and optimal health may slowly reintroduce minimal amounts of carbohydrate into their diet until they find a comfortable balance between their health and carbohydrate use. They find their carbohydrate tolerance.

If you're ready to get started with a ketogenic diet, you may find these articles helpful: