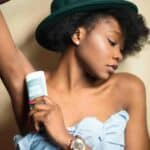 Back in the day, people smelled bad. There was no deodorant and if there was it was a natural deodorant. But, as you can imagine, it didn't help much. That's just how it was. They were hard workers and they sweat. Can you imagine Pa Ingalls rooting around Olsen’s Mercantile for pit stick? Maybe snotty Nellie Olsen had a bit of perfume to wear but the rest of the world happily stayed stinky, and they didn’t really care.

Fast forward about 100 years and we find ourselves constantly trying to make our bodies smell good. We use perfumed soaps, shampoos, and deodorants like there’s no tomorrow. That’s all fine and dandy to an extent. It‘s nice to live in a society where people don’t stink, but some of the chemicals in these products are pretty harmful.

Deodorant is at the top of the list. Mainstream deodorants are filled with fragrance and aluminum. Aluminum is the ingredient that clogs up your pores, so you don’t perspire. It’s the component that keeps you dry. Honestly, staying “dry” is unhealthy. Your armpits are meant to sweat to rid your body of toxins.

So, are there deodorants out there that will keep you smelling sweet without hurting your body? Absolutely! Just like we found the best non-toxic sunscreens and non-toxic facial sunblock, we’re going to take a look at five of the best natural deodorants on the market today.

Making natural products that keep the human race and planet healthy is pretty important to Schmidt’s. They decided they wanted to create a deodorant line that was non-toxic, accessible, and fun.

This deodorant is plant-based, all-natural, and sports a variety of scent combinations. I really like the lavender and the charcoal, but they are all pretty easy on the nose. You’ll find botanical and mineral-based ingredients in the formula. Schmidt’s deodorant is vegan-friendly and 100% cruelty-free.

Having tried Schmidt’s deodorant myself this is the brand I currently use on the regular), I can tell you that it does indeed keep odor away. Now, since there isn’t any aluminum in the mix, you won’t be dry under the arms. However, you’ll smell fresh as a daisy. You need to reapply this product multiple times during the day to stay sweet, as this is the case with most natural deodorants.

Native deodorant is made in the USA and is based out of San Francisco. Each batch of pit stick is hand-poured. You can bet your bottom dollar that the Native brand is free from aluminum, parabens, and sulfates. The company never tests on animals, either. They do, however, test on consenting human volunteers. I think this is great because how else will they know if their product truly works?

Each stick of Native deodorant contains skin-loving ingredients like fractionated coconut oil, shea butter, and tapioca starch. The company also tosses in probiotics for added benefit. There is a line of products for men, women, and teens.

This is another deodorant that I have personally tried and I gotta say, I love it! It can be 100 degrees out and you’ll be sweating like a dog, but you won’t stink. It truly does last all day. I didn’t have to reapply with this deodorant, which is pretty amazing.

OK, so this deodorant is really cool. For starters, their packaging is absolutely flawless. I was instantly drawn to the fun font and bright colors. Secondly, the ingredients in this deodorant are so natural they are edible. Now, don’t go licking your pit stick, especially after you’ve used it, folks although, you could...) With that being said, there is literally nothing harmful in Soda Wax deodorant. It’s great for people with sensitive skin.

Each tube of Soda Wax deodorant is hand-poured with just six simple ingredients: coconut oil, beeswax, powdered sugar, tapioca flour, baking soda, and essential oils. This combo of ingredients is said to combat stink for up to 12 hours.

People from all walks of life have given this deodorant a shot and everyone seems to claim victory over the stink with it. You’ve got athletes, blue-collar workers, and yoga enthusiasts who all say the same thing: “Soda Wax Natural Deodorant is the only thing that has worked this well for me!”

Lume has been making its way around the Facebook circuit for quite some time. This amazing little tube of funk-defying goodness is a doctor-developed product. In fact, it was featured on the hit TV show, “The Doctors”. It is said to work for 72-hours straight! So, if you’re a shower skipper, this is the under armor for you.

Here’s another cool fact about Lume: The company also makes deodorant for your private bits. Seriously, this company has you covered…literally.

Another thing I really like about Lume is that it is baking soda-free. Baking soda isn’t a bad ingredient, but it tends to break some people out. So if you've tried a few of the others on this list and you found them too harsh, this is a good one to try. Lume is also free of aluminum and fragrance oil. It is cruelty-free and vegan-friendly. Yay!

Yes! One of the best things about Lume is that it truly keeps you from smelling for 72-hours. After 24-hours, you may need to reapply but that’s a lot better than reapplying every few hours as some natural deodorants require. Lume is the only deodorant, designed by an OB/GYN, that is safe for both pits and privates.

This company has checked all the boxes. They’ve got deodorant formulas for sensitive skin, kids, detoxing, minis, traditional tubes, and jars of product that you apply with your fingers. There’s literally something for everyone’s preferences.

Primal Pit Paste is made with organic ingredients, cruelty-free, aluminum-free, and synthetic fragrance-free. It effectively controls odor, too! It doesn’t matter if you’re working out on the football field, dancing, or watching a terrifying horror flick…this stuff keeps you from smelling like the last rose of summer.

Each deodorant is handcrafted in Austin, Texas. This explains why it combats odor so well…everything’s bigger in Texas! The coconut oil, arrowroot powder, and essential oils keep your skin soft and stink-free.

I haven’t personally tried Primal Pit Paste but I’ve heard nothing but good things about it. Some familiar names in the health community swear by the stuff. Dr. Axe has been using Primal Pit Paste for years and highly recommends it. David Sinick from Paleo Hacks says, “Over 6 months later — no smell, and it’s now my go-to deodorant. My girlfriend and I both use it, and we love it.”

Most people that use it seem to prefer the paste over the traditional deodorant stick.

There You Have It!

These are my top 5 natural deodorant picks! I hope you can find one that you like on this list and give it a shot. If you do, let me know in the comments what you think. Happy pit-sticking!