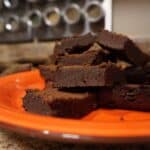 So, you know the bakery section of the grocery store? You know, where the brownies flirt shamelessly with you! Ugh, if only there were ultimate fudge keto brownies to rescue you from those sugar-filled store-bought devils.

Anyway, my husband is drawn to that bakery section. Every week we go shopping together as part of our Sunday ritual and every week he the baked goods. The last couple of weeks those brownies have been catching his eye.

I have a lot of brownie recipes already, but this time I wanted a super fudgy kind of brownie. Chewy and fudgy and super rich! The kind of keto brownies that you have to eat with a tall glass of ice cold milk.

I came across a conventional brownie recipe from Alice Medrich that looked like good inspiration and I went to work. This is what I came up with and it's pretty dang fudgy! Let me know what you think!

They definitely satisfied Blake's sweet tooth. He said they tasted great and those store bought frosted brownies won't even phase him next time we go grocery shopping!