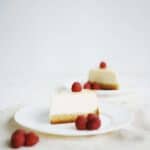 These cheesecake tips and techniques will take the stress out of baking cheesecake.

Mastering the art of baking cheesecakes is an arduous task. It is hard for anyone to perfect the method of cooking a wide variety of cheesecakes just by following simple recipes. Let alone to adjust the recipes to omit the sugar, dairy, grains, or any other offensive foods to fit your way of eating. However, there are several pointers that can help in baking cheesecakes like a pro.

The distinct texture of the cheesecake mainly relies on the cheese blended with sugar and eggs. However, it is the type of cheese that informs the character of the cheesecake. For instance, the New York-style cheesecake is dense since it is made with cream cheese; the Italian is lighter because of ricotta.

There are also other cheeses that can be used to achieve different texture. One is the Neufchatel, popularly used in French cheesecakes. Also, cottage cheese and fresh cheeses like the mascarpone, goat’s cheese, and Fromage blanc can be used.

The Mixing and the Cracking

Unlike other kinds of cakes, where the key is beating air into the batter, cheesecakes suffer if over-mixed. In order to achieve wonderful results, it is advisable to have all the ingredients stored at room temperature before mixing.

Cracking is probably the most common problem in baking cheesecakes. Since cheesecakes, like custards, depend profoundly on the setting of the eggs, they must be cooked slowly and gently. If the eggs puff, get grainy or overcook, and constrict when cooled, the resulting cheesecake will have an undesirable split on the smooth surface.

The main trick in avoiding cracks in cheesecakes is the coaxing and gentle heat. Cooking cheesecakes slowly also means cooling them gradually. The quick change in temperature upset the structure of the cheesecake, which often causes the cracks. Moister and creamier cheesecakes are achieved when the heat is turned off while the center is still loose and allowed to cool inside the oven.

Several cheesecakes, especially the classic ones, are usually baked in a water bath, which is a pan of water. This is done in order to moderate the temperature. Because the water remains at a constant temperature, the cheesecake sets slowly, thus resulting in a creamy cheesecake.

On the other hand, cheesecakes that are rich in flavors can achieve the same results as the classic cheesecakes by baking slowly at low temperatures. In order to prevent the cheesecake from developing cracks during the cooling process, you can run a thin knife around the edge of the cheesecake. It is important to ensure that you perform this as soon as the cheesecake comes out of the oven. More so, remove the spring-form pan, except the metal base, after chilling.

When you see a crack in the cheesecake, do not fret, but simply use it as a starting point when cutting the first slice.

The Cutting, Freezing, and Draining

To cut a baked cheesecake, use a knife and dip it in warm water. Always remember to dry the knife before slicing each piece of the cheesecake.

Since cheesecakes are high in fat, they can freeze well for up to two weeks if covered tightly in both foil and film. However, cheesecakes with high water content will tend to become icy. In this case, freezing is not advisable.

Lastly, in draining fresh cheesecakes, you can line a medium sieve that is about eight inches wide, colander or fine strainer with two layers of damp cheesecloth. Set them over a bowl and refrigerate after covering.

Hopefully, these cheesecake tips and techniques help you bake the most beautiful cheesecakes ever! Try my low-carb chocolate hazelnut cheesecake recipe and let me know what you think!