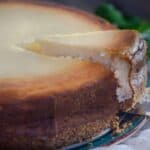 Have you ever wondered about the history of cheesecake? Where did this indulgent dessert originate?

Many people would agree that the best birthday cake is cheesecake. There are others who cannot imagine a world where cheesecake was never created. Nothing compares to having a delicious dairy treat every once in a while – almost everyone loves a slice of cheesecake.

Cheesecake and the Ancient Greek

Many believe that cheesecake originated as a New York City delicacy somewhere around the 20th century. Surprisingly, the history of cheesecake dates back to Ancient Greece. The Ancient Greeks have been creating cheesecake for thousands of years before any American even tried to put their hands – and mouth- on the delicious indulgence. There are several publications indicating that cheesecakes were first created during the seventh and eighth centuries B.C. right on the island of Samos in Greece.

Back then, the Greeks created cheesecakes by combining, wheat flour, honey, and cheese that had been pounded to a paste-like and smooth consistency. The mixture was then formed into cakes, baked and then cooled before handed out. During the first Olympic Games that happened in Greece in 776 B.C., the athletes ate cheesecake, which provided them with the energy they needed for several rigorous competitions.

Cheesecake became a popular Greek delicacy and was even the ancestor of Western culture’s wedding cake tradition. It also became a custom for a Greek bride to bake and serve cheesecakes to her new husband’s friends as a gesture of hospitality. This concept in marriages eventually paved the way for wedding cakes.

During the time when the Romans occupied Greece, cheesecake recipes were one of their rewards of war. They quickly adapted the delightful taste of the cheesecake and being a powerful empire that they were, the Romans went on to conquer and occupy much of Europe and Great Britain. During their conquests, the Romans introduced the concept of cheesecake to various lands, which came under their influence. It was only a matter of time before European migrants carried with them their treasured cheesecake recipes to the land of the brave and the free, America.

Although the original cheesecake recipe came from Greece, it quickly adapted several culinary styles and variations during its journey to other territories. The basic ingredients, namely the cheese, flour, and sweetener, are still present but the contemporary cheesecake bears little resemblance to the cheesecake of Ancient Greece.

During the late 19th century, New York dairy farmers invented cream cheese, which quickly became the popular type of cheese used for cheesecakes and the popular New York Style Cheesecake emerged. The flour used for the crust was substituted with cookie crumbs and graham cracker crumbs, which made the cheesecakes from the United States popular. Ancient cheesecake recipes also use honey as sweetener, but it was eventually replaced by the more common granulated cane sugar. In addition, the standard cheesecake today also includes fillings, such as milk or cream, flavorings, butter, and eggs. Today’s cheesecake doesn’t have to be sweet, you’ll find many savory cheesecake recipes floating around as well.

Even the method of baking cheesecake has evolved. Back then, all the ingredients were mixed together all at once but modern cheesecakes are made with layering the ingredients; first, the crust is made, and then the filling and lastly, the toppings, if available, are added. The toppings also have unlimited variety, which includes spices, chocolate, nuts, fruits, and whipped cream, among other choices.

But even though the ingredients and the process of baking have evolved, everyone still owes the divine treat to the Greeks. Cheesecake has lived for years and still continues to prosper – it is an ancient delight that will never go out of style no matter how old it is.

There you have it, the history of cheesecake!