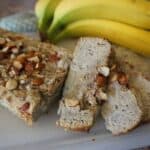 Lauren over at Healthy Indulgences is a wizard when it comes to low carb substitutions, especially the sweet ones! If you haven’t checked out her site and sampled some of her recipes, get your buns over there! I adapted her Healthy Banana Nut Muffins recipe to make keto banana bread recently and it was wonderful. Tasted just like the real thing! I used almonds instead of the walnuts she suggests and only for the topping to give it a little crunch. The bread was so moist and squishy, I’m sold on coconut flour!

I actually made a second batch using a bunch of frozen mixed berries instead of bananas and it was just as delicious. I'm gonna play with that recipe a little bit and share it with you when it's perfect.

I like to top the keto banana bread with a non-dairy butter substitute (obviously use real butter if you can tolerate dairy). My favorite is the soy-free version of Earth Balance. I get it at Sprouts. Warm it up slightly and spread a bunch on a slice of this keto banana bread. YUM!

If you can tolerate dairy you could also ice this loaf with my keto cream cheese frosting recipe. Depending on how sweet you like your banana bread, I would cut the sweetener in half in the frosting. I'm sure it would be awesome though!

Coconut flour is a great alternative to other grain-based flours. It is so versatile and gives you the perfect texture for baked goods. You can even use it to batter some of your favorite fried foods like onion rings, fried zucchini, cheese sticks if you can have dairy, and chicken nuggets. It can also be used as a filler where you would normally use cracker or bread crumbs in meatballs and meatloaf.

My favorite brand of coconut flour is Anthony's. I get it on Amazon in a 4 lb. bag. No funny ingredients and works great every time!