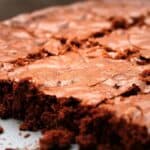 Chocolate cravings can get surious...especially when those hormones get kickin'! That's where a keto low-carb brownie recipes come in handy.

Brownies are probably one of the easiest desserts to make keto or low-carb. It's super easy to swap out the flours and sweeteners for keto or low-carb ingredients. They're also very easy to make gluten-free and dairy-free. So if you're looking for a chocolate fix that's compliant with your keto or low-carb plan, brownies are the way to go! Here are a few of my all-time favorite low-carb keto brownie recipes.

This ultimate fudge keto brownie recipe is super fudgy. This one's not for the faint of heart folks. I only need a very small brownie from this recipe to kill a chocolate craving in its tracks. It's almost too fudgy! Serious chocoholics will love this one! The freeze well and keep in the fridge forever. They do harden in the fridge though, so heads up.

This brownie recipe is low-carb, gluten-free, dairy-free, and the texture is damned near the real thing! Just the right amount of chocolate and so delicious, you'll have a hard time not diving head-first into the pan. Seriously, I have a hard time only eating one of these at a time. I usually freeze a good amount of this recipe as it's not only addictive, but it makes an enormous batch!

These are my favorite keto low-carb brownie recipes. There are a million different variations out there, but these are my ride-or-die chocolate craving killers. Let me know what you think if you make these.