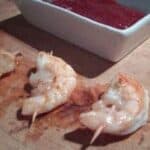 Body parts are probably the most popular Halloween party food replica and these shrimp ears are the most realistic body part I've seen so far. There are a ton of Halloween eyeball and severed finger recipes, but these are different!

This recipe is the creepiest of the creepy! It reminds me of all the horror movies where the serial killer takes ears as trophies. Eeeew! That's the stuff real nightmares are made of.

I first saw this recipe years ago on a now-defunct website that had the most realistic cannibal dinner party. It was so gross and so cool! There were shrimp fingers and scallop testicles. I love this idea for an adult Halloween dinner party.

You can totally put together you own cannibalistic dinner menu by serving these shrimp ears alongside this cold cut meat head, dead man's Halloween ribs, severed fingers, and mozzarella eyeballs.

I think that would be a pretty creepy dinner party. So realistic! Of course, I'd add some plastic severed limbs and red wine in super cool gothic wine glasses for that added effect. Dim lights, spooky music, maybe some fog from a fog machine. Oooey, I'd totally go to that party! 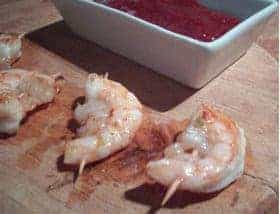 To make this dairy-free, just skip the butter and double the olive oil.